Issue 1; End of the World Anyone? 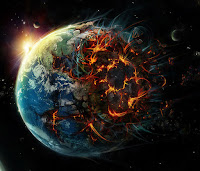 by T W Coombs
Due to the network being down at work I decided to catch up on the News from across the globe and locally, and all I got was a constant stream of death and destruction and hatred.  We have become a world where the only thing that we now class as News is shocking or about the darker side of human existence.  Sadly all these things are happening around us, and has it always been like this?


The answer is yes it has.  As a child in the UK I would think the world is fluffy because you don't watch the news, then as you get older you hear things and see things on television that you don't quite understand so everything is still all good.  Then you become an adult and you realise what kind of a place we live in.
With all this going on around us by what seems like every second, the constant deaths of people by some mad mans hand, to the threats of terrorism to all major countries in the western world and even by people who are from the country they are attacking.  So what popped into my head when reading all this depressing news, I shall tell you, the guy who once shouted in my face that Armageddon was here might have been onto a point.
Before you run away I have not totally lost my mind, nor am I seeing the living dead or the four horsemen in my street but what if this is the beginning of the end.  The polar caps are melting and the sea will slowly take over, leaving the human race with less space to populate.  We are having wars that are only to do with religion and money so not like someone trying to take over another land just having wars for wars sake.  It is human against human every second of the day, you can't even drive your car in peace as someone will cut you up and then call you a 'wanker' for the privilege of having to slam you breaks on and nearly killing yourself and the person behind you.
The weather is slowly taking countries out left and right, natural disasters are taking over, with earthquakes, hurricanes, tornadoes in the news on what seems like a daily basis.  What if it is not God or the Devil who is to bring about the end of days but just us, left to own devises.  Who needs to blame some all knowing being when we are quite happy to destroy ourselves.  The world is run by the greedy and powerful not the average man.  The US President is trying to curb the coal burning energy business with reforms, which of course the power companies and organisations are going to fight, because they make tons of money burning coal, even though it is killing us more quickly that we first thought.
So that crazy guy that screamed that the world was coming to an end as I was a little lost in central Boston, and the religious guy with a mega phone that said me shopping in Oxford Street in London was going to bring about the destruction of the human race may have been on to something.  Obviously shopping isn't going to single handily bring about Armageddon but I kind of see where he was going with it. If we carry on as we are, spending time arguing about climate change, yet in the mean time carrying on as normal, going clothes shopping and buying clothes that have travelled half way round the world to be sold in Oxford Street stores then we will destroy ourselves a lot quicker than we probably think.
Maybe we should go back to being children, thinking the world is fluffy and stick our heads in the sand, but truthfully if we don't do anything then that sand your head is in will turn toxic and kill us in a slow painful way. I am a true hypocrite and like the rest of us still shop, still drive and still buy things from Supermarkets instead of locally.  I do recycle but I also own a lot of tech so I use lots of electricity so we, myself included, are all to blame, we are all horsemen, we just haven't yet realised.
Newer Issues Current Issue