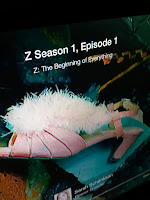 Game of Thrones, Boardwalk Empire and Breaking Bad are just three of the huge television shows that have come out over the last few years or so. They have swept across many nations leaving bewildered television watchers behind, but yet more is to come from Games of Thrones and new shows are coming all the time.  Now this would not have caused such an issue ten years ago but we don’t live in a world of once a week programming we live in the new era of television, it has evolved into a much bigger beast.  With the mass marketing of Netflix, Now TV, Amazon Prime and others, we may be creating what we fear the most, our own Zombie apocalypse.


With new shows being made and released by online stream companies only, it has become too easy to watch hours of television in one sitting.  The age of the box set binge used to the people watching there overpriced Buffy or Star Trek VHS Box Sets, so eventually ended as it was too expensive to go and get the next season, but no more.  Now you move from show to show, one season after another, so much that even though I'm very English I am using the word season instead of series.

I am a big consumer of online television, due to the fact I have other things to do, so I won’t be around at 7pm on Fridays for the next three months to watch this one programme.  I now miss everything, but then it is online and I will watch it all in one sitting.  ‘Luther’ was one of these, I had heard of it, and Idris Elba was forced on me with no idea who he was.  So when it appeared on Amazon Prime I thought I’d give it a go and the girlfriend and I got comfortable and pressed play. Finally after what felt like twenty four hours later we emerged into the light, the final credit had gone and we were up to date, but it was not a pretty sight to behold, the after binge fatigue was there for all to see.  So when someone asks me if I have seen it, I can now say yes and I thoroughly liked it, and then when they ask me what else I have done, I can say “nothing because you said this was worth a watch, do you know how long it all is?”.

This is the downfall of online viewing, you may be up to date with the latest season of House of Cards on Netflix, but have you been living your life, doing things, having fun, learning something new, or have you been watching some else's imagination unfold.  Television is like a drug, recently I have started re-watching The X Files, I only remember the first three seasons from when I was a child, and it is a nostalgia thing but I do seem to zone out and just watch three or four in a row.  I also break it up with Mozart in the Jungle the great show on Amazon Prime, that I power watched the first season because the second was on it’s way out.  I have half watched shows all over the place.  I like what I like and do not usually follow the crowds, I do not watch nor like Game of Thrones, I found Breaking Bad boring 90% of the time and as such have stalled at season three.  But why watch it? Will it change my life? Will it make me feel alive and happy? No, it won’t and why? because it is a television show.

So maybe open the curtains, go and talk to someone, stop asking people to ‘Netflix and Chill’ which apparently is a thing with teenagers somehow, just Google it.  Even venture outside, it is good for you.  Before the hate comes, I am not against television, I love film and I love some of the shows being made for television and online but I think as a race we are losing our interaction with each other because of it.  I do hate reality TV though, dancing shows on or off ice, TOWIE, Big Brother and all the other nonsense that is dragged from the states, with these new age famous people who are famous for no reason but being on their own show.  Good for them, but when I ask who’s that, don’t be shocked and think I am out the loop, because it is the same look I give you when I quote a book and you look at me like I have just turned up on your doorstep preaching and ask what show is that from? That would be Moby Dick, and the reply I get is, oh the film with Thor in it, No! Thor had nothing to do with it.


Because of the nature of humans we are spending more time in front of the light box, mesmerised by the images before us and each year we are getting more addicted to the newest show, we all must watch and consume.  In conclusions the Zombie Apocalypse is slowly creeping up on us and we are the first batch, from out of nowhere it will hit, before we even have the chance to push ‘next’ rather than wait for the 30 second timer to countdown to the next episode.
Newer Issues Older Issues Current Issue
Curated Articles of Note