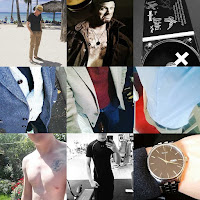 We have suddenly gotten half way through January, most have started drinking alcohol again and added the gym membership to the previous year’s ones to gather dust again.  We have resigned ourselves to being slightly overweight and as the cold weather persists are quite happy to vegetate in front of Netflix and Amazon TV.


Especially with the continuation of 'Lucifer' coming on the 17th of January on Amazon and new series 'A Series of Unfortunate Events' on Netflix which looks very good for all ages, nearly.  So what does 2017 hold for us all, more of the same?

I for one am a believer in the resolution, to be less stressed, to take up meditation, so to be less stressed and continue with my work out regime and add some new areas to it at home as well as the gym.  But whatever you do, don’t do them in January.  This is where most people seem to go wrong, we have a boozy, food indulgent month of parties and family time then try and cut our bodies off to what they have got used to, you can’t go cold turkey (get it, Turkey! Okay I’ll continue).

So instead why don’t you just cut back, it is January after all, then slowly move towards the well documented “New You”, which as we know is the same you in spandex, or like me sitting in a room with earplugs thinking of my breathing, minus any spandex.  I start any thoughts on the new year in March and April, because the skies are a little lighter when crawling out of bed in the morning, the temperature is above freezing to the point it feels even tropical compared to the apocalyptic two previous months.   So don’t try and grab your year by the horns and own it, just be gentle and eventually it will go your way, it is a philosophy I stand by.

According to the general view 2016 was a bad year, I must admit it started well but was a hard year for me with a lot of stress from work to buying a house behind me now, I am positive about 2017.  Plus already booked the first trip away, Venice is coming up which I am very much looking forward to. And of course there will be a travel blog to go with it. Other posts that will fill 2017 include Fashion (I have let London Fashion Week Mens pass this year), Film and TV thoughts past and present, some music, tech, lifestyle, food and fitness the list just goes on, and one of my resolutions is to plan more and post more so watch this space.  2017 is the year of twcoombs.co.uk.

I wish you all a prosperous and healthy 2017.
Newer Issues Older Issues Current Issue
Curated Articles of Note