Issue 28; Do It Yourself, But No Hipster Here 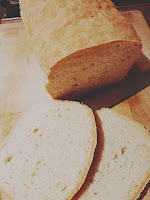 You may notice a pattern in a few of my last blogs, making Pie from scratch, mending clothes to keep them going and recently I have started making my own bread.  But trust me, there is no Hipsters here.

Not that I have anything against the term or the people that seem to fall into the hipster world, with their beards (which I am envious off), checked shirts, jean cuffs, sleeve tattoos and one speed bicycles.  It is not just because I live in a town and not Shoreditch or some other up and coming gentrified area of London. It is just that I am not one, I may have similarities in dress, but trust me, I was there first, I will save money not spend it on loads of nonsense because it is the next fad (CBD oil an obvious one), overpriced avocado toast and flat whites.  So I hope I am clear, I just feel like I mentioned in my last post that skills have been lost and I just don’t care about the overly materialistic world I was part of. To turn a horrid phrase, I am doing me right now, kind of.

Many of my failings were not my fault, I grew up in a world where the microwave became king and now every food could be frozen and was quick to cook.  5 minutes in the microwave and ding, you had a burger and chips. Fair enough, the chips were soggy and the burger was so dry you may as well have shoved two chunks of cardboard in my face.  But it was the future.

Fast forward to now and we have entered a world were organic is king, even though the difference between a Carrot and an Organic Carrot I still can’t get right, they look and taste the same and, as far as I am aware, they are not grown in labs currently.  So they are organic, stupid term misused by people over spending on veg. Anyhow. We can all see the pattern, the supermarkets are full of mine and older generations, buying jars and packets, the next one is in farm shops, cooking outside with fresh produce, or are they?  Mostly they just don’t shop. They eat in more often with UberEats, DeliveRoo and all the other wonders of the modern age, they eat out at coffee shops and supper clubs and have many all day brunches in between, washed down with so much caffeine you could keep the whole of London awake for a week.

So we still live in a world of outside looks and inside nonsense.  With this in mind I can’t sew, or couldn’t. Shirt buttons was my only skill.  Even though over time my cooking has improved I was never one to take on a challenge, even if simple.  But as I age and see the fake world of Instagram corrupt and destroy lives mentally and in some cases physically, I have turned my head and seen the light (excuse the preacher bullshit but easier to explain this way).  I want to fix clothes, bake bread instead of buying it, do things in this modern world we can still do for ourselves. With Trump getting ready to, well, Trump the other side, we could end up seeing another war with no win but many loses on both sides and the world falling apart around us.  What happens when we can’t buy things in shops? Pop out and grow veg? Bake bread? People used to live off these two things, with the occasional bit of meat. In this day and age many would fall with lack of knowledge.

So as I have mentioned in my last couple of posts I am going to try to make, mend and do as much as I can myself.  I have started off small as you can see, I made a Pie, I fixed some boots and my Epsom jacket, I have even now start making bread.  Not to sell, not to impress dinner guests because I can and it is much nicer and better than anything bought in a shop. I don’t have the outside space to do vegetables but maybe will grow one thing next year that I can in a pot and go from there.

I won’t be preaching my new found idea of doing things myself as I am not going to be the next person to go and live off the land somewhere like a mountain man and grow a massive beard.  Not that I can grow even a small tufted made beard but the thought is now in your head of a burly bearded guy so stick with that. I like Netflix and films, another thing the wilderness doesn’t bring you and even when I am outside hiking I use GPS.  So I am part of the modern world but I want to help myself when it all goes to shit and I enjoy doing it. Come and join me?
Newer Issues Older Issues Current Issue