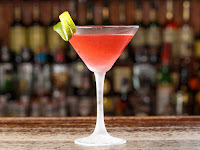 This particular concoction has caused some drama over the years and I do not mean within a drama, even thought it was.  The arguments of who actually created this once sidelined drink that was boosted into the minds of people everywhere in the late 90’s.  No one truly knows who made it but it is great to see and who do you believe?


One self titled cocktail historian gives the honour of creating this cranberry juice blend to Cheryl Cook in South Beach, USA in the mid 80’s, a fresh feel to the Vodka and sunny climate.  Then we have Neal Murray who has self proclaimed that he created the limey delight in 1975 by adding Cranberry Juice to the already existing Kamikaze cocktail.  Which for Neal may be hard as the Kamikaze is noted as first appearing 1976, a year after his cranberry adding days.

Next up we have Toby Cecchini who once again claims he himself created the world known version of this drink in 1987 going off the similar recipe of Murray, using Citron Absolute vodka and Rose lime rather than standard vodka and fresh lime juice.  It makes a slight difference but does it make it the drink we all have heard of?  The final one is from bartender and author Cheryl Charming who credits the creation of the internationally recognised recipe to both Toby as above and Melissa Huffsmith-Roth in 1989.

No matter who you believe or credit the creation to, the fact of the matter that it didn’t hit the hearts of many until in 1997 when a certain book was published, closely followed by a television series of the same name that hit the big time.  Of course I mean ‘Sex in the City’ and the pink sharp delight of the Cosmopolitan cocktail.  This cocktail was everywhere after it was made more famous than the characters who drank it and was then drunk by many, even normal bars would serve it to give their customers what they wanted.  It got to the point that even the show knew it was too much and in the first film adaption a line was given of why they stopped drinking them, which the reply was "because everyone else started”.

I am fond of the cosmopolitan during the summer, it is a simple four ingredient mix and is shaken into a cocktail glass and served with a simple lime twist.  The IBA specified ingredients are;

It is also a cocktail that is not time sensitive, unlike so many others, even though I would not advocate to have one with your morning coffee.  Though they are not limited to evenings and due to the cold fresh taste with that fruit laden sharpness are great for a summer lunchtime refresh, they are still amazing to start or finish a night off.  I spent many a night in the Dominican Republic drinking these to the point of where leaving the bar stool was a problem and the thought that quantum physics would have been easier to grasp than getting back to the hotel room.  They do have a sweetness to them but sometimes this is needed above the harsh kick of alcohol in a tropical setting.