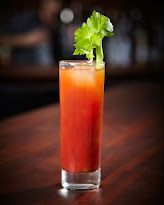 The following cocktail is seen by many as breakfast, it’s savory world is the cocktail world's “Hair of the Dog”, to ease the fussiness from the previous nights over indulgence.  It has many different variants due to people's tastes and the concoction of this delight was born in Paris and named after a English monarch, even though some Americans think differently. Let's delve head first into the ‘Bloody Mary’.
Named after Queen Mary the 1st, the Queen of England in 1553 whose nickname is ‘Bloody Mary’. Which came about by her having had over 280 religious dissenters burned at the stake in the Marian persecutions, which led to her denunciation as "Bloody Mary" by her Protestant opponents.  Why this was used was mostly I guess due to the tomato juice and nothing else, it is a better name than the Red Snapper.

The drink was created by Fernand Petiot in 1921 in what is now Harry’s New York Bar, this bit of information came from his granddaughter and the place did have it’s hand in many cocktails around the time.  Of course like all stories there are others, like a bartender named Mary created in a bar ‘Bucket of Blood’ but even typing it sounds absurd so very unlikely.  Others are linked to other New York bars, but was just Vodka and Tomato Juice, nothing more.  You can believe what you like but I like Harry's tale.

What of the drink, it is basically a lunch or breakfast beverage as mentioned above and everyone mixes them to taste but the IBA class it to be the below;

Stirring gentle, mix all the ingredients in a Highball glass with ice.  Simple but amazingly delicious and you can see why I class it more a meal than a drink.

Like most cocktails it stems back to hemingway liking them, from what I have read of his and others he liked to drink, in many forms, so he may have liked them more or less as we are led to believe.  I am not a Hemingway expert.  I believe that everyone should at least try this and very much for lunch or brunch, and always go Bloody, no point going Virgin, that is just cold tomato soup.
Newer Issues Older Issues Current Issue