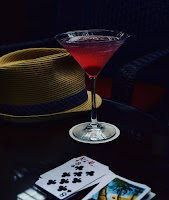 At Dreams Resort and Spa in La Romana you have the choice of seven restaurants and 5 bars with three evening bars. So as you can imagine the heart and liver are about to take a mild kicking. But if you want to keep slightly healthier then there is a well equipped gym to burn off the overindulged night before. We never tried the gym but did look at it once.


We frequented three of the a la carte restaurants on more than one occasion and due to tastes didn't try the others. I am a fan of Asian cuisine so I am going to start with Himitsu, we ate here about three times over the course of the ten night stay and they did the best pork dumplings, light but filling, along with a great satay chicken.  All the dishes were small and quite light but still filing, plus the type of noodles differ on the same dish over two visits which kept it interesting.  Next up was the Italian Portofino, which served great Italian style cuisine and not an American version they really went all out and the tastes were sensational.  From pasta to stuffed chicken breast they had everything.  The first time we tried Portofino we arrived at ample dining time 7:30 pm and there was a forty-five minute wait, now at home you go ‘no thanks’ but where are we going, nowhere, and thankfully this is when we found the comforts of the Veranda bar, our soon to be best friend Mareta and the Cosmo count started full steam ahead.

We had tried a couple of the various cocktails over a few days but the Cosmo won above all the rest.  And if anyone gives me a Dirty Vodka Martini ever I will smack them in the face dramatically and shove the glass somewhere not so magical. It was foul and I unsure why anyone would ever drink them.  I like an olive but not like that. Anyway. 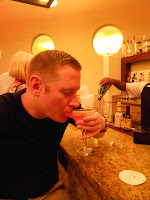 We both decided the Cosmo was simple, juice based so very refreshing and had enough alcohol in it to take down even the hardened drinker (who wouldn't touch it as it is pink).  And the count begun, it became a count as we were sending pictures of many of them to my other half’s mother who was then determined that her daughter was becoming an alcoholic by the third day of pictures.  When I say count, by the end of the first full night sitting at the Veranda bar we had already lost count.  The problem with counting is you need to be ordering and making a tally, but this is where Mareta comes in.  He made the best cosmos ever, even better than me, he does do it for a living, and he doesn't wait for you to order, well us anyway.  Before I had finished the last minor mouthful a new fresh one was in front of me, ready to be consumed.  This become a nightly occurrence, and didn't include our day time trip to the Rendezvous bar in the lobby during the day which had nice outdoor seating so you can smoke.  This became the perfect spot for some card and cigar action. 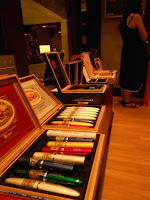 This brings me nicely onto the cigars, there is a shop, well more of an emporium of cigars in a room that was basically a Humidor due to how warm it is in there.  I bought a couple on our stay and came home with a box of 10.  They are very nice and have a hint of vanilla which is surprising and give the whole smoke a nice sweet smell.  The majority were made in the Dominican Republic with a small selection on Cubans, but if in Rome and all that, I could have gone to Cuba to smoke their cigars.  And by the way the Dominicans make nice cigars, so try them if you can.

Back to food, the Italian which I mentioned earlier, remember that? Portofino was the name and the food was great including this amazing dish of Ravioli stuffed with Spinach and Ricotta in a tomato sauce which I could have eaten forever.  The final restaurant I want to mention is the Seaside Grill, which is mostly meat, a good steak, burgers, chicken breasts and all manner of bits to start and finish but it was something from their lunch menu that blew my mind.  It wasn't even something on the menu it was a free snack starter, banana crisps (chips) with salsa, good god they were amazing and I will try and make them at some point, but they were outstanding.

The beach is amazing and how you expect a Caribbean beach to look and feel like, white sands clear water and sun loungers as far as the eye can see...hang on, what?....yes that is right, photos of couples on the beach with not much around them is a slight lie, there are a lot of sun loungers, which is great because you don’t need to get totally covered in sand when hanging out on the sands.  I am not a beach person and go for one reason only, snorkelling.  And with the clear waters it really is a great place to snorkel plus there is a small reef just off the beach so there are plenty of fish of all sorts, starfish and plant life all within the roped swimming zone.  Outside of the roped area you are on your own as water sports and canoes are about so do watch out.  But if you are like me you will nearly drown whilst following a huge gorgeous looking fish and colliding your snorkel with the rope and sucking in part of the Caribbean Sea.  Then realising I am not that good and treading water, who knew, certainly not me. 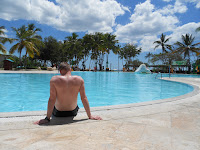 The beach has waitress service, from aptly named beach butlers as do the swimming pools.  We stayed mostly around the main pool as the biggest and the loungers are not as close to each other and in view of a nice bar and the pizzeria.

In all the holiday was what we wanted, the true luxury relax, we even had a massage at the spa, I won’t go into details but I am not wearing little cotton stretchy pants again, at my normal spa, oh yes I have one, I get to just wear my boxers. Bloody stretchy tight pant things are not a good thing when trying to relax.  The massage was nice though and un-knotted my shoulders.

If you get a chance to go here I would recommend it, but be careful of Mareta and his Cosmo making skills, I think my head still hurts and was nearly a month since I have been back.

Ps.  The weather was nice in March, even though a bit cloudy, but we did have one day where the heavens opened for a few hours, but was still fun...as you can see. 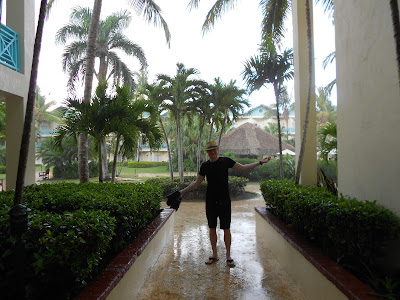