Issue 7; Would the Doge be happy?

If you are not up with your Italian history then I am writing about the oddest and most picture postcard city in the world, Venice.  With its waterways and alleyways, it's weaving streets, the maze of its bridges and the majestic stillness of a city with no cars.  It is a place like no other.

A last minute three night trip was booked with Grace and a small group of friends and family to Venice, so off we went and to my knowledge my first trip to Italy.  And what a place to start.


I fell in love instantly, the feel, the language, the food and this is the most relaxed city I have ever been too, the most uptight people are the tourists. Which there are many, thousands at any given time and area. So if you're not into crowds not the best place to traverse.  But if you veer slightly off St. Mark's Square areas and high tourist parts then you can find a hidden gem or two, we sure did. From cafes, bars and restaurants, they are on every corner and serve Italian food for Italians. The more tourist places are a bit predictable with menus, price and quality all being adequate, so will always

come down to price.

Putting food and drink aside, as in the world we live in we know what we can get and where but the real beauty of this place isn't the designer shops but the architecture. You may have heard it has been there a while and so oddly for a city built on water and held up mostly by wood and stone it is crumbling and falling down.  This is no means a slight on the city in anyway if it was brand new everywhere then it would not have its majestic amazement.  From the second we left the airport on a water taxi you just know this place is different.

We were dropped off at our hotel on the jetty out the back of the establishment and settled quickly into our room.  I will admit our hotel was a little dated with the interior of the rooms and dining area but in all it was clean and served its purpose as a base.  Not that I wouldn’t stay again, the staff were nice and the breakfast catered for everyone even though was a bit chaotic if everyone ventured in at the same time.

It didn’t take long for us too be hitting the streets and  I had these grand ideas that everywhere we went would be on a boat of some kind.  I went on two boats, both taxis and one from the airport and one back to the airport and that was it, I used the trusty feet for the entire trip.  Walking through the narrow alleys lined with shops, food outlets, bars is just amazing and very easy to get lost but you are never far away from where you need to be.  You may head down some creepy looking alleys but everywhere we ended up, lost or otherwise I never felt worried.  Fair we were in a group but in Venice all the streets are dark and narrow. 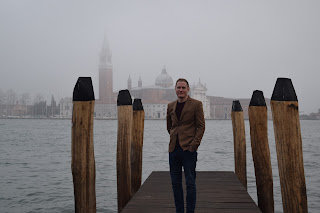 As this was our first time to Venice we had to do the tourist bit, so we purchased a ticket to three museums and went wandering.  The Musie Di Piazza San Marco was a nice little walk around seeing some very old art and many globes (they did used to love a globe it seemed).  You also get quick entrance to the Doge’s Palace, which is very impressive and moving from the glamour of the government chambers to the cold and bare dungeons was a site to see and a must.  Sadly due to time restraints I didn’t get into Saint Mark’s Basilica, but next time for certain, as was still so much I would love to see as only once went down onto the grand canal promenade and that was for some early dinner before a much needed sit down at a Vivaldi concert close by, held within a room on the Doge’ Palace by the way and when in Venice you have to check out some classical music.

Because of the tourists I did find one thing annoying the rose and rubbish sellers.  They try and sell you cheap selfie sticks which I hate at the best of times, helicopters that light up at night and then roses all the time.  They even tried to sell me one whilst I was standing chatting to my Father in law, no offence I like the guy but that is a bit much.  When I say no I mean no and touch me once more and we have a floating rose seller.  They are like a plague but if people didn’t buy things from them then they wouldn’t exist but they do, so there you go.  I think the Doge’s would be happy with the way their city has panned out, it may not be the hub of Europe like the port it once was but it certainly draws the admiring crowds.

I really have fallen for Italy through this city and can’t wait to head back for a slightly more relaxing weekend. And venture further into the depths before heading to other great places.

If you are going please remember one thing, there is a hotel tax that I was not aware of that you pay when you leave so it is not within your room price.  It is also worked out very strangely, 1 Euro for each star of your hotel per person, per night, up to a maximum of 5 consecutive nights.

Thanks for taking the time to read, see you soon.
Newer Issues Older Issues Current Issue