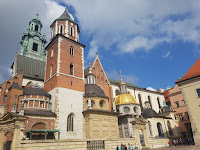 I struggled what to call this article to be honest, I like to keep it catchy but wasn’t sure if to go serious or a bit cheesy, obviously I went with a little rhyming cheese.  I think because the weekend was a mixture of cheesy fun and serious times which will come apparent later.  First, why Krakow?

We decided on Krakow as a dear friend to the group who had been waiting on a new heart sadly passed away recently whilst unable to make the groups last trip.  So as he wanted to go to Krakow it was only fear we take him with us, metaphorically of course.  So even though a reason for sadness to go it would have been the wishes of him to have a laugh, so we did.

We had booked our flights through Easyjet and everything else through Escape Poland, which I would recommend, as they managed our transfers, trips and hotel with one booking.  It made everything so much easier. Our hotel was basic but did the job, it was basically like a Holiday Inn, the hotel was Hotele Kazimierz 2, it was close to the Jewish quarter and did a reasonable breakfast. 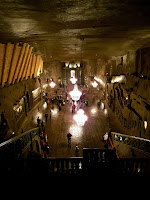 So with Polish Zloty in hand we ventured out pretty much straight away as our first tour was picking us up an hour from our arrival at the hotel.  We started our hectic days with Krakow salt mines, which is not for the unfit or the major claustrophobic.  It was less than half an hour in the rain to get to the mines and we were soon joined with our tour guide who sounded like Dracula or the count from Sesame Street and as he seemed to be about seventy it was highly amusing.  As I have stated this is not for the unfit as there are 380 steps in the first section and 800 across the whole tour, plus a lot of walking in between, so if you have mobility issues don’t do the tour.  At its deepest it is 135 metres down with a lake that is denser than the Dead Sea.  It is a strange place, with its chapels and lakes.  It was a very long tour and is about 3km in all, but takes some time.  There are rest rooms and food and shop areas along the way to rest briefly.  In all it is not a bad tour but a bit long for my liking and as we had a early flight I must admit I was tiring by the end. 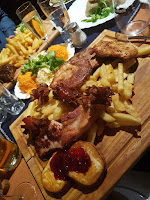 So it was only fair that we went to a restaurant and bar that had been recommended to us and was close to where were staying, Google maps helped no end on this trip.  After wine and large amounts of food, including a meat sharing platter it was time to tally up the bill.  We were lucky to spend 80 pounds sterling and there were six of us.  One thing is for sure, you will get a lot for your money when it comes to food and drink. 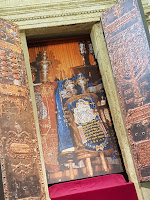 Day two was slightly less of a rush and we were due to go on a tour of the Jewish quarter just round the corner from where we were staying.  Our guide was nice and new a lot and pointed out many great facts on Poland and the area, and we visited a now unused temple which is a Jewish museum holding some of the artefacts still around, as many things were stolen by the Nazis in WWII.  The tour ended near the Schindler’s List museum but we decided not to go here after I saw the queue mounting to get in, we instead stopped for coffee and lunch.

From here we ventured into the old town square, which is very much the tourist trap of Krakow and reminded me of the old square in Prague with its tourist set up of bars for Stag weekends and cafes for everyone else.  After getting asked if I wanted to come to a strip joint by Strippers out canvassing their club I knew that I didn’t want to see anymore of the square and we headed out back to the much calmer Jewish quarter.  From here we picked a Jewish restaurant to eat and once again the portions were large and the food 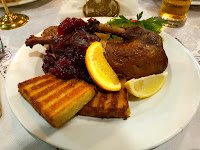 rich but lovely especially this half a roasted duck.  The restaurant was small but lovely and the staff dealt with our questions, so check out Ariel (www.ariel-krakow.pl) With wine, beer and brandy’s flowing like there was no tomorrow I was unsure how I was going to make the 6:30am start for the oddest day of the whirl wind tour, Auschwitz. 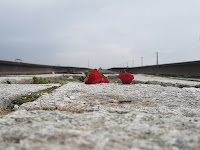 Even though it was an early start to go to Auschwitz it is long journey so had time to sleep on the way.  After being rushed over to our tour we were given headsets and off we went.  After about ten minutes our guide irritated me, nothing she did just her delivery was odd and annoyed me so I took off my headphones.   Now the tour is once again quite long at three hours and you don’t see everything either, it is a big site.  I wasn’t sure on it, mostly due to the snack shops etc outside like any other tourist attraction rather than the memorial it is.  I think it is just a very morbid attraction with the rooms full of hair and another with shoes, it is terrible what happened, don’t get me wrong I just think having it like it is just seems wrong to me.  After a quick bus ride to the second site you do get hit with the scale of the killing machine set up to get rid of as many people as possible.  It was shocking to see and kind of left me feeling numb and sickened at the same time.  But three hours was a bit too long to be told the same numbers over and over and the guide wasn’t that scripted so did repeat a few things.  I am also one for documentaries and knew many of the things we were told so was more just to see this place and the sheer scale of it all.

This was one attraction I was definitely glad to get away from and we headed back to the hotel to relax. 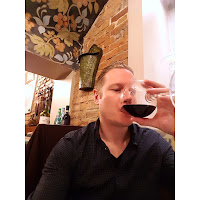 We had booked the restaurant for our last night in Krakow, which comes up in the top ten restaurants to visit in Krakow and we could see why.  Bombonierka was outstanding, located in the basement of an old building, with its own wine cellar so I was in my element.  The waiter knew his food and what wines to have with it and we went with his recommendations which were outstanding.  The food was also amazing and I couldn’t stop myself having all three courses and then having brandy to finish, which turned out to be a Brandy they could only get two bottles a year and is infused with Chocolate and spices and was divine.  It was certainly the best meal I had in Krakow and surpassed a lot in other places.  I will recommend this place to anyone visiting Krakow. 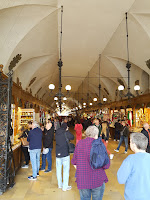 Krakow is a nice city and was my first ever taste of Poland.  The people are lovely and the city is very much like most cities.  I do believe it is one of those places you like or fall in love with, I liked it but I wouldn’t go to Krakow again.  Well worth a visit if you like walking around, the weather is very similar to the UK so did stay clouded over when we went in early September.