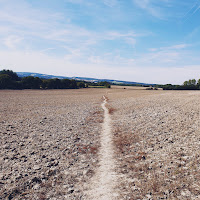 I have lived in Kent pretty much my entire life yet there is so much of it that I haven't seen so after @gracecmbs mentioning this place for the last three years I thought it was time we actually went there. So we packed up the hike gear into the car and headed out and in 25 minutes we had arrived.
This trail starts and ends at what is known as the devil's Kneading Trough named this, after its bowl like shape and the fact the rest of Kent is flat so as these hills appear out of nowhere, did he devil make them? Probably just the way most hills are created. 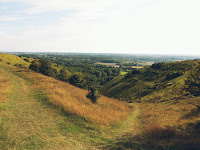 sun. But I had planned for Grace and I to do part of the North Downs Trail a 7.6km off road path, on what turned out to be a 32 degrees Celsius, one of the hottest days of the summer. With extra water loaded up in the packs we were prepared. And thankfully the first part of the Trek it heads down hill and into town.  Only down side in this heat was it is in complete open land.

Walking down steps built into hill was helpful and made the descent quite pleasant, across arose and you hit the field paths. The ground levels out so we were only competing with clumsy feet and me recording video and not looking where I was going. The trail was nice and easy to follow and well posted but using Alltrails app made it a lot easier and one I think is more for me. 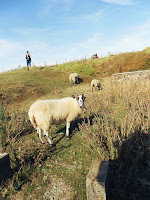 The first half is heading down into the village of Wye which you drive through to get up to the point to start. But this being one of the best places to live in the UK it is worth being on foot. The pubs, restaurants and cafes are all perfect for walkers and are nice. So if you want to get lunch then you have a good choice. We didn't start until later than originally planned so grabbed some food from a local CO-OP and found a bunch in the church grounds to eat with a view then soon continued.

The second half is were the ascent starts, which is gradual at first but then soon becomes more steep. We both certainly felt it in our legs especially with the sun on our backs, but we were saved by the next couple of kilometres were with the woods. Once up the main hill it just becomes a gradual ascent and easier to navigate.  The North Downs Way wants to take you into the road for about 200 metres but with the Alltrails app I worked out if we join the Wibberley Way trail then we will walk off the road and still be heading the same way and end up at the same place so quickly adjusted and we stayed shaded and cooler right up to the jubilee crown hillside.

I had know idea this was even here, like the Folkestone horse, this chalk art work is built into the hillside but was created for Queen Elizabeth's Jubilee. So not an old Norman design or anything. From the top you get to join the sheep as they surround you trying to get shade and munch there way through the grass and wildflowers scattering the area. We at this point took a small detour to see a small group of cows chilling out, couldn't get too close but one did come and sniff my hand to see if I had something tasty to eat, then realised that was a no and headed off to carry on grazing.

The trial then moves off across the edge of the hill right across to the edge of King's Wood where we Trek through back to the Devil's Kneading Trough.  It took us about three and a half hours and with the heat is worth it for the views. A good beginners trail but some fitness needed for the hills. If you find yourself in Kent then go and find this place.