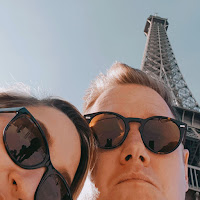 
In the beginning.......I know very dramatic start but you need to get going somewhere, don’t worry I am not on about the creation of France, it is just the explanation.

When Paris came up as a destination for this years short break, I decided that rather than fly we 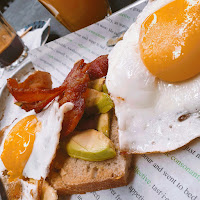 would get the Eurostar from St Pancras International station in London.  Now there are closer stations but one, I have not been on the Eurostar and two, I have been through the station so many times I just wanted to get on it there as a nice station.  Plus rather than jamming some nasty Starbucks panini we sat down and had a lovely hipster breakfast in one of the restaurants and got up there early so no rushing about. Bliss.

I did think the Eurostar would be a nicer way to travel, sadly not so much.  It is a bit more civilized but only slightly. As it is now cheaper than flying it is like a normal train, just with more sheep getting in the way and not understanding customs and passport machines (see here).  So it is a rush by everyone to get on and then get to their seats. Fair we actually ended up in the wrong carriage to start with but then soon realised and had to squeeze past the sheep to get to our carriage whilst some rude pompous businessman moaned loudly “not sure why people are going the wrong way” whilst subsequently heading into carriage 11 whilst he colleague told him they were in 10.  Lets just say we smugly said to him we made the same mistake and why we were going the wrong way, yes mate we heard you.

Once sat down it was fine and within 2 and a half hours we were in the centre of Paris.  Some advise on when you get there, do not head to get a taxi, the queue is ridiculous, and they try and herd you towards it like cattle. So after being shouted at that we needed to queue for a taxi I said I’m fine and moved out the front of the station. The best way to get to your destination is just use Uber.  Paris has Uber so get the app, you then have the price upfront, can use your credit card and get picked up in minutes and not taken the long way round to the Hotel with calls of “haven’t we already been past the Louvre” is a thing of the past.

We were staying at the Hotel Eiffel Blomet which is about twenty minutes away from the tower.  The hotel comes with good rooms, a spa, with pool and steam room you can use with or without a treatment and apparently an honesty bar, which we never used.  The hotel itself was really nice and the staff were helpful when needed, mostly due to the minimal coffee pods we were given each day. Could they not see I am normally highly caffeinated? 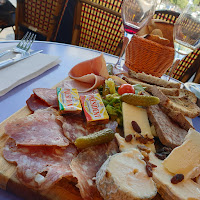 We went for a walk not long after checking in headed out, and found the place to first stop, well it was called Le Place.  Wine and a mixed meat and cheese board was had which set us up to head out to find the Eiffel tower. I say find, within a few minutes we could see the top of it so didn’t take long to be in the crowds of Instagram people all getting the same photos to post to feeds. Along with people selling you cheap models of the tower in gold and silver colours.

On the first night we were not sure where to go and eat, so had a walk and after finding places to busy to get in we ended up in a very french restaurant which did classic French food, snails anyone? Or maybe sausage meat in a colon? No? Us neither, so stuck with roasted duck with veg and then chocolate mousse and creme brulee for dessert.  We had a serious language barrier so I brought out some French words I had remembered from GCSE and a bit of French for dummies and if you try they appreciate it, but some do not speak English so make sure you know your basics. After some pointing we got what we wanted, and easily ordered coffee at the end.

After a rather refreshing sleep we got ready for our day.  We headed off towards Notre Dame, using Google Maps. Now Paris is quite big but if you are able, walk everywhere, it took us an hour but we saw so much that we would never have seen on the Metro or in a car.  We walked to the river then headed down all the way to Notre Dame, stopping off for a coffee and crepe looking out across the river.

and we got small out the way window seat for an amazing lunch.  It wasn’t too pricey for where it is and found most of Paris in this range.

Second piece of advise if like many city tourist destinations, book everything in advance and if you want to go up the Eiffel Tower then you are looking at two months prior to travel at peak times, we sadly missed out.  But what we did book were, I think, much better, rather than going up we went down into the Catacombs under the streets of Paris. And unlike the low budget horror film ‘As Above So Below’ it was quite interesting and no one died.  We waited for about twenty minutes before being allowed in and we were half an hour early. But the queue to get tickets was miles long and not moving.

The Catacombs are crazy, deep below even the metro they snake beneath the streets of Paris.  You will emerge a distance from the entrance. After going through the tunnels you hit the main reason for scrabbling around in semi darkness, the bones.  With the history told to you throughout this is certainly an experience and should not be missed, but make sure you can handle the steps and the walking, it is not an even floor.  Upon exiting and getting back out into the sun we walked over the road and found another cafe for some wine before getting an Uber back to the hotel.

For dinner we headed out towards the Eiffel Tower as wanted to see it at night, after about fifteen minutes we came across a really nice looking Italian with outside seating free.  Run by an Italian he got confused when started with Italian words, there was a bit of a language barrier as we never did get our water. The food was perfect and I couldn’t fault it, service not so good but they were packed and some large tables and to be honest we weren't in any rush.  Full to the brim with food and a very nice wine from Puglia, the home of a friend of mine and the waiter it seemed, we headed to the tower. 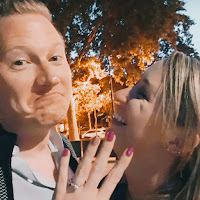 The Eiffel Tower does looks lovely at night all lit up, but the crowds on the lawns are crazy but with so much security it is quite safe and we found a place just off the edge with no one around.  And I will always say this is the perfect spot as this is where I asked Grace to marry me, and thankfully she said yes. I did say some nice things but to life of me can’t remember any of it.

Our final full day we had booked in for a morning trip to the Louvre, and still the queues for pre booked were huge and on a 28C day with no breeze it was a bit much.  Once in the crowds got worse it seemed. It was a lot busier than the Da Vinci Code that was for sure. The building is beautiful and inside the paintings are amazing but the crowds spoil most of it.  The noise in itself is enough to drive any art lover mad, if you did this in the Tate you would be kicked out. It was like being in an airport or something. The crowds around the most famous pieces were annoying and most of them with selfie-sticks just videoing everything. 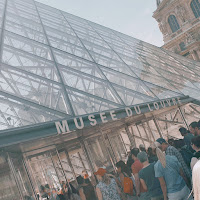 We did go into the room with the Mona Lisa and I saw it, even though from a distance over the sea of heads of tourists, setting alarms off as they kept getting too close to everything.  It was a sad state but I still glad I did but the experience of the crowds makes it much less enjoyable. And when we followed the signs for the exit we ended up in a shopping mall. I didn’t get it, I just want to get out of the crowds at this point but I had to slowly move through a mall for fifteen minutes.  Fair to say I will never come back to go in the gallery it is nice enough outside.

Due to the extreme heat we soon found a small pizzeria to have some lunch and even had two ice cold glasses of coke, and some wine, obviously.  And we had done a lot of walking so our legs were falling apart.

We walked back to the hotel via a shop to get Grace some biscuits you can only get in France, fair to say we are now well stocked up on them.  Our final meal was probably one of the best, we went early and got a table at Le Cap, five minutes from our hotel. It is worth going to but make sure you book, we were lucky.  The food, wine, service and price were great, this is a must recommendation.
For those more fashion conscious of you, with the weather being quite warm all my clothes were light colours and cotton or linen and certainly did the job.  With city breaks comfy shoes for the day are needed along with loafers for the evening.

We grabbed an Uber back to the station in the morning and got coffee and pastry here before coming back on a much quieter Eurostar train back to London then home.  It was an amazing holiday and I will always hold a bit of love for this city for the obvious shiny reasons. 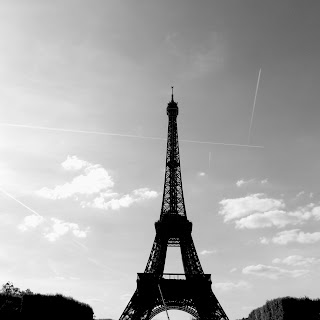