Issue 23; Climbed a Hill, Came Down a Mountain

This is not a story of struggle in life, the title as they say is literal.  You may have noticed that I have taken up the very English hobby of hiking, known in certain circles as rambling (not my circle though), and have been pulling my ever agreeing better half along so we have “us” time. This is how we ended on a soggy Sunday climbing a hill but coming down a mountain.

This is one of the few times that we have come to our late holiday in October and not jumped on a jet plane for warmer or dare I say for more sophisticated climates and chosen to do the stay-cation and booked a place in the UK to spend a few nights away from the norm. On occasion we have done similar you can find us in some country manor drinking too much wine and over indulging in the art of food. But, this time we found ourselves in a pod cottage on the side of a hill, setting off fire alarms, roasting marshmallows in the rain and preparing to climb a big hill.

After approximately six hours of singing happy songs on a road trip not too dissimilar to an episode of the Waltons (or not), we made our way into Coniston the middle sized lake of The Lake District and home to the Old Man of Coniston, the reason for being here except the obvious to relax.  I will start with the pod, from the outside it could just be a glass door sauna, awaiting towel wearing people to dash out to jump in the tiny stream by the gate, but inside it is similar to a bedsit in Soho, only bigger. On-Suite and a kitchenette next to the bed, good storage a dining table and sofa, what more do you need.  It is at the height on the glamping spectrum, which is needed when you know a wet weekend is ahead of you.

With my supreme cooking prowess I took to frying up two rather large rump steaks, because of my skills I set the fire alarm off, no more than six times.  I should have just bought thinner steaks, but we got there in the end. Without an actual fire I might add.

Sunday came and our packs were done and we had a rough idea how to get the starting point.  Rather than drive up to the car park at the Old Man, we decided (I decided) to walk from the pod as our host advised easy to do.  The initial hill was quite hard and we were a minute from the pod, thankfully it got a little easier once we hit fields. It had been raining heavily all night but thankfully it was only cloudy now and the forecast advised it was not going to rain. It didn’t stop the ground being boggy and the small streams not medium torrents of water.  With slightly wet and muddy feet we got to the next point, the car park.

The true Hike began.  I was using once again my AllTrails app to navigate and as per one of the users we went anti-clockwise round as easier.  So with a few others from other countries and locals we headed up the hill.

It is at this point I thought it was a big hill, the definition of a mountain differs between countries so not easy to work out.  Plus if I had said to Grace this was a Mountain, we may have been in the country house down the road getting full body hot stone massages rather than halfway up a mountain, soggy with aching legs.  And we had only been hiking for an hour. Even though it seems I am setting this awful picture and that we were having a horrible time, but in fact it was the total opposite. The views were amazing, the clouds hiding the peaks around us.  The distance waterfalls clearing the rain water into the lake, it was a truly amazing place. Just damp.

We reached a section called Low Water, a small lake just over half way up and a good spot for lunch before the final push to the top.  As so many people do this trek mostly over the summer the trail is pretty much a path that is easy to follow. Now the part after the lake is a zig zag up a much steeper side, the legs start to burn and we soldiered on.  We finally hit the last stretch as the path vanished. At some point there must have been a bit of a slide and the path was eaten up with fresh slate. So we had to scramble over the rocks, at this point I was happy it was cloudy, we were in the cloud cover and you couldn’t see if there was a gradual slope next to us or a sheer drop. 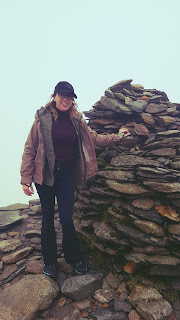 With crying legs and feet we levelled out in the clouded chilliness of Narina-esque proportions, the calm of the air, the muffled silence.  We had made it, we had hit the summit of this big hill. And Grace was smiling and so was I, we had climbed it, we had reached the top and it was amazing, even though there was no view, just a deathly whiteout.  After a quick stop off it was time to head down so we started on the other side of the “Hill” and our boots took us into the clouds.

I can see why this path would have been hard to climb up as it is a constant slope, it never levels out and there is nowhere to sit except the floor.  The landscape is very different from the other side, this is large boulders and grass all the way down, surrounded by streams. The cloud cover made this area have a particular spooky calm to it, this was helped by the fact we hadn’t seen anyone for a couple of hours.  And then out of the cloud and whiteness came what looked like a high cliff we were heading straight for, but it turned out to be a place called Goats Water. A body of water so still it could have been solid dark stone.

We were about halfway down at this point and I had fallen over (I am skipping this bit) once and with the clouds around us we had got quite wet, without it actually raining, thankfully we were well wrapped up and even had gloves on.  As we descended the cloud cover began to be above is, it warmed up and there was an abundance of sheep.

The last part was easy and very pleasant of a walk even though our bodies were ready to stop.  The

final push was to head back down the Fell and the glorious pod. This seemed more treacherous as before as it had clearly been raining hard down here and the ground was ready to swallow us up in a mud frenzy, we got slightly lost and Grace submerged one leg up past the ankle in what had been a little stream and now looked like a miniature white water rafting area.  I think I can happily say we have never looked so forward to having a hot shower and laying down than we did at this point, it felt like we ran back to our dwelling.

Now to explain the point of the title.  Warm and rested from walking up the “Hill” I did some research and the Old Man of Coniston is actually a Mountain and is a height of 2,634 feet high (803m) and we had traversed what is thought of as a Hard trail.  We had, after no prior peeks, done the 12th highest in the UK. And myself and mostly Grace walked up a Hill but actually came down a Mountain.
Newer Issues Older Issues Current Issue