Issue 22; The Road to Ten Kilometres

Since the 70’s the art of running or jogging as you may call it became big and in June this year I joined one of the biggest pastimes in the UK.

Out of the blue my friend stated that we should do some sort of race, originally the choice was if one of these muddy ones with obstacles, but I mentioned that we maybe we should start with something simple. So after much deliberation (1 limp text message), I decided that a 10 kilometre race was more realistic, and achievable. But before we could start I needed to see if I could even road run.


You see I was a basketball player in my early years, and sadly something that happens is your knees get destroyed so for years running was never an option, plus even from a young age I was more of a sprinter and never had much prowess in long distance.  Saying that I have been going to the gym for four years prior to this moment and had been running on the cushioned treadmill and lifting weights with my legs, I am basically The Rock. And due to this very healthy endeavour unbeknown to myself I had strengthened my knees to amazing heights, for me anyway.  I found this out as before I committed to any of this, I had to see if my knees could hold up. I went out for a 5km run and surprising even myself made it with a pace of 7 and a half minutes with no pain or ache, so that was it, we booked the Faversham 10km race and had 3 months to get in racing shape. Easier said than done.

I found it easier to stop all cardio at the gym and have all my cardio as running the mean streets of Faversham (when I say mean, I actually mean 90% middle class white), using the gym for strength training using weights etc.  Plus I found myself really enjoying the outdoor running, which is something I thought I would never commit on paper or even say (thankfully saying it out loud has yet to happen).

Within a couple of weeks, I had tested out running 10 kilometres, which was surprisingly okay even though a slight battle of legs versus mind.  My knees were screaming for me to just sit down and write like I used to by the end, but after massaging them and soaking them to a prune like feel and the look of an eighty year old, they were fine.  Winning at running here I feel, even though maybe not that majestically. So the weeks continued, 7km and 5km were my norm, with the occasional 10km done on a Monday night, with Gym in the middle. Then the unthinkable happened (cough) I had some holiday and got rather lazy, for the next month. 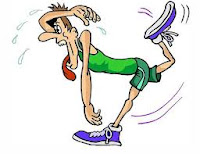 The dilemma of this laziness was I just couldn’t be bothered with going on a run and did force myself to go out.  Once out I was fine but the true struggle of my lazy self and my fitness obsessed self were at war and it was ugly. Just think Kardashians if they all wore the same dress to a party, it was carnage, there was hair pulling and everything.

Reluctantly my lazy self gave in and August became my month of fitness and unfortunately thirty six degree heat.  Now saying that was tough was an understatement, but on the hottest day this year and for the last 20, I stepped out onto the semi melting tarmac and ran 5km.  And felt like utter rubbish, but I had done it, that is what counted. The faithful day had rolled around, I was ready to take it on, the heat had slightly passed and rain was pouring from the heavens.  I was up and raring to go.

I ran two further 10km's in the build up and had rested for a few days before with no gym, but stupidly the Wednesday before this fateful Sunday in September I decided to give blood.  Rookie mistake ladies and gents I can tell you. My body was a pint down and was struggling to function I drank so much water I could have put out any fire on the way round but it made no difference I was doomed.

The race began well, I found my pace early on and felt overly happy with myself for overtaking a large chunk of the runners, fair they were on the larger side and may have just been people walking home and not in the race at all.  Within 15 minutes I was up the first hill and going strong, then my calf cramped up. Like a babies fist when it finds your hair, there was nothing I could do and the pain set in, and heroically I didn’t stop. I slowed however and plodded on, it was a struggle I wasn’t expecting and played havoc with my motivated mind and was only to get worse. 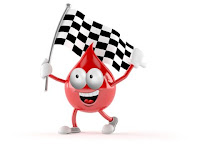 After six kilometres the blood giving fatigue hit, like a heart attack and at one point thought I was going down.  I was struggling to breath my lungs were working overtime due to that missing pint not full of oxygen, my heart was pounding like a Chinese drummer.  I won’t lie, it bloody hurt. Due to shire determination I continued even though slowly, I got up the final hill and at last my leg felt better (a little anyway) and I sped up, I even shocked myself and crossed the line only 15 minutes slower than the time I was going for. I had done it, I lived to tell this tale.

After a massage and beer I had recovered well enough, as in enough to go home and sleep for three hours.

All I can say next year I am going to do better, with a full body of blood and a good pre-race stretch I’ll be under the hour.  I bet you.