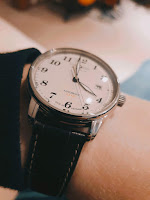 Created to a point at the, well, the dawn of time, was, Time.  How we know it now came into the world in 1847 in Greenwich, even though the concept and breaking the day down into blocks happened centuries before.  But now it rules our life in everything we do and I am glad we have time. Not because I hate being late and wouldn’t know this without time, but what would I put on my wrist and spend so much money on.

As Albert Einstein said, “the only reason for time is so that everything doesn't happen at once.” Which is why over time I have built my collection of watches up, but I think I have come to a solid end, at least for now, with my most recent purchase a watch to keep going.

The brand named after the disastrous Zeppelin airships make simple vintage styled automatic watches.  I love the look of them, they seem to have that feel of something from 1910 when the ships were first flown commercially. The off white dial of the LZ-127 pictured screams new vintage, matching with the leather strap.  The complication is German designed and made, they are not as smooth as a Japanese or Swiss movement and you can hear the counter weight spinning sometimes. However the watch is lightweight unlike some more hefty automatic watches and doesn’t come up too thick for watches in its price range.

With the date at the three o’clock, second markings around the edge, with large solid numbers it is a good classic design and would suit any wrist.  I have been wearing it for two weeks and it hasn’t lost any time, which I have found with other brands of similar quality and price. I have been wearing it daily, so it has not powered down and lasts overnight.  It has about a 24 hour reserve but then may lose time as it slows but depends how you wear your watch. But for me, this has become and instant constant, my day to day watch and I do not see my mind changing. For this thought to come from someone with twelve watches in a watch box, not including others not worn in other storage places, is a big thing.

Zeppelins range from the £200 mark but some deals are available, for transparency I did purchase mine on a super special deal on Amazon as in the week running up to Black Friday, but normally is £220 through Amazon (at the time of writing £149 sale). Would I pay £220? Maybe not as you could find a smoother mechanism in that price bracket but it may be worth it for that vintage look.
Newer Issues Older Issues Current Issue
Curated Articles of Note