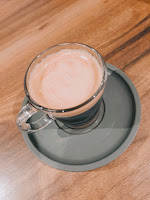 The black liquid of the gods, slowly being made across areas of the world, keeping the western world going throughout the day. The feeling of wonder and joy it brings, that euphoric feeling of amazement. Of course I can only be writing about one thing, coffee.

I drink enough of it and realised I had never actually written anything about it.  I will start with my history of coffee rather than the history of coffee itself. Basically up until about 6 years ago I didn't drink it at all. This is due to a vivid memory of my darling mother letting me try her coffee for the first time, I took that first bitter sip, then proceeded to be violently sick, a lot. Oddly enough from that fateful day in the late 80's, I didn't touch a drop and hated it from then on. Now I have come to realise it possibly was the fact I was about 8, but also it was most likely some Nescafé instant monstrosity and not a baristas carefully constructed cup. In conclusion I obviously my tastes, even then, had an inclination towards the better end, at the age of 8.

Apart from my early hatred of the drink, coffee became and is the second most traded commodity in the world, we are clearly a very stimulated people. Yemen and Ethiopia will argue they both first made coffee as it is today, either way they did something that took over the world.  And now with social media, if you don’t bang on about your coffee and blend then you are just not doing it right. There is a coffee shop on just about every corner and this trend which in my mind is a New York thing is now world wide. With the mass chains that I now don’t go to, I lean towards the more hipster joints when out.  And with everyone having a coffee shop you can go to each end of the scale. From the cafe, to the exquisite delights of Ralph’s Coffee & Bar, from Ralph Lauren in Regent Street, London.

But what about when you are at home? Some go for the full on machines, spending more time than they do showering in the morning on that wake me up hit, with some blend and roast of bean that it hard to pronounce and even harder to get in the cup without burning the bean.  With this in mind and my laziness and want to just get on with my day I have been happily drinking Nespresso coffee. The delight of the pod, the simple turn on and push button and yet get one of the nicest coffees I have had. I have my favourite blend and stick to it, if they ever stop making that certain coffee I am pretty much screwed.  This concept was new to me but was patented in 1976 and first tested in 86’ Japan, so it has been around a while and now one of the biggest home coffee companies in the world.

If it wasn’t for the fact that coffee is packed full of caffeine and in my case a bit of sugar I would drink it constantly, I love the bitterness.  My 8 year old self would probably just feel ill if I could go back and tell him that one day you will be very awake and love the stuff, he would then have kicked me in the shin and run off, I was a little git.

We have become a world of over stimulated, awake, jittery people, and I for one love it, now to post a picture of my coffee to Instagram, because if you don’t then you didn’t really have a coffee, surely?
Newer Issues Older Issues Current Issue