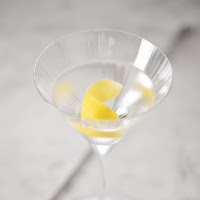 The most famous cocktail on the planet has to be mentioned.  It comes with an air of mystery, visions of a perfectly decorated bar with a bartender you are on first name terms with, even though they still call you Sir. But it is one of the most simple to mix, however to get it right is not as easy as you think.  And the big question is it even actually a Martini?


I am sure you have guessed I am writing about the shaken not stirred delight, ordered many times by our favourite and most un-secret secret agent in the world, James Bond, the Vodka Martini.

The ingredients are simple and are similar to the Martini, but with Vodka, six parts Vodka, one part dry Vermouth, the rest of the taste variations are all down to the garnish such as olives, onions or a twist of lemon.  It is a fresh and clean drink which should be drunk moderately but made with the best ingredients can be a fine drink. Now for the shaken not stirred option. The term first came up in the book Diamonds Are Forever in 1956 but Bond didn’t utter the words, Bond first said it in the film Goldfinger in 1964, before this, a variation was said by Dr. No in the film of the same name two years earlier and one reason for the shaken was uttered by a character on NBC’s The West Wing;

“Shaken, not stirred, will get you cold water with a dash of gin and dry vermouth. The reason you stir it with a special spoon is so not to chip the ice. James is ordering a weak martini and being snooty about it.”

Now James Bond is not being snooty I do not believe but if the pill taking, drink dependent super spy would probably want a clear head when on assignment other than maybe we were led to believe, so shaking any drink does water it down as well as cool it more.  The stirring is a much better option for that hardened clear drinker and to get the tastes through, the art of the temperature is to keep your Vodka in the freezer as you should the Gin for a Martini. Which brings me nicely to the thought: is a Vodka Martini even a Martini?

In my last outing on the delights of the Espresso Martini I explained that the reasoning behind the name is down to the glass it is served in. The glass itself is now called the Martini glass by many but is actually just a cocktail glass, which was a modernist design of the champagne coup style. A Martini glass is wider than the cocktail glass and is said to allow the aromas of the gin to come through in the Martini. So a Vodka Martini is not as purists say a Martini as this is a drink with Gin, but this is now what it is called and what's in a name. So there you have it, it is only a Martini by name as many are called now due to being served in a cocktail glass. So purists can continue to grumble as they sip the cooled Gin frowning on these modern terms from the 40's.
Newer Issues Older Issues Current Issue