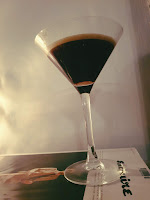 It is fair to say I have a sweet tooth, I struggle to pass in the vicinity of chocolate without trying to have some.  And when the mood takes me I also like something sweet in my Friday night drink. And, like my taste in chocolate, I do like some bitterness along with my sweetness, like the look on your loving wife when you have done something annoying like breathing too loud.


To quench your craving and to also relax the wife, might I suggest a new cocktail on the block, mixing two hipster loves, cocktails and coffee, the Espresso Martini.

When I say new cocktail, this is more a relative term compared to many cocktails, the Vodka Espresso was actually created in 1983 by Dick Bradsell during his tenure at the Soho Brasserie when a future supermodel asked him to make a cocktail with coffee.  Or in his own telling of the story “Wake me up and then fuck me up”, which if an 80’s supermodel, that sounds about correct in the speech. With many drinks it moved around bars along with its bartender creator until the 90’s when sadly Martini glasses were used for every cocktail going.  Appletini anyone? Thought not, but due to this Martini obsession the name was changed for good and the Vodka Espresso evolved into the minds of the popular.

Every cocktail bar will do one now, in its varying forms, from a Cuppa Joe, the hazelnut variation or a Flat White Martini with Baileys.  But the original is best, if I do say and is simple to make. 50ml of Vodka, 25ml Coffee Liqueur, Shot of Espresso and a teaspoon of sugar, or 5ml of syrup, whichever is your taste.  Shake with Ice and double strain into a Martini glass. Garnish with three coffee beans if you have to hand, I tend not to, as they can crack and break into your drink, and add nothing to the flavour.  The International Bartender Association specifies the coffee measure as a short, not a full espresso shot, it does sweeten the flavour if less heat is pushed through but I find the more bitter notes a better mix in tastes.

With many nice cocktails the ingredients are simple but the flavours are intense across the palette.  The Espresso Martini is a good after dinner or as the cocktail hour drink of choice, it will pull you from your after work slump with the caffeine and sugar, setting you up for the evening ahead.
Newer Issues Older Issues Current Issue
Curated Articles of Note