Isseu 34; Some Things Should be Left Alone 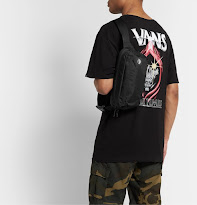 At a certain time in your life you should realise that some fashions are not for you, mostly because you will eventually realise that even though you are into fashion you look silly, your inner youth is just that inner.  Fast fashion seems to not be totally going at this time which is a shame but leave this to the younger generation.  This is coming from someone not that old, so please trust me when I say “You are too old for that shit”.
To be honest with you all I have been struggling to keep up with the issue every two weeks, not with lack of trying.  But when the world is at a standstill and you are not going anywhere and nor is anyone else, facts and things to say about them are few and far between.  But whilst I looked at a new pair of canvas style sneakers on Thread and a thought popped into my head, are these for a younger person.  You see they are orange and bright afar step from my normal gray and white suede sneakers I currently wear this time of year.  Now this though got me thinking so I got online and started to browse the in thing, the one item so many want.  Of

course this is a very long list so I narrowed it down and eventually realised something that I could not ignore, the reemergence of the Bum Bag, known as a Fanny Pack in America.  I have not been blinded to this 80’s blight appearing on cat walks and high streets, but I have never put much thought to them until now.

You can now pay £50 for a simple black oversized bum bag, which

they now call belt bags as well, to let them seem okay.  Not that anyone wears them near their belt and instead they go over a shoulder or across the chest.  And if you are doing this I really hope you are at least in your twenties.  It is not even an ageist thing, but when
even my generation had these we looked bad, it was the 80’s but now we would like old people trying to be hip and trendy, rather than being trendy in our own right.

I believe there are rules to wearing them, women of basically any age can pull them off, I may have used a picture of a model with one but I think we are used to women of any age with a small bag and they work like a handbag (purse).  Also if you are young and have that styled look, streetwear it goes with, suits, not so much.  I think when you get to 30, you should lay down your bum bag and let it rest for the younger generation or you may start looking like this in their eyes; 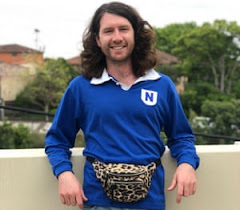 I am aware fashion is in the eye of the beholder, just because I see them as an unsightly disturbance in the force of the fashion world, others may see them as the future.  These others are normally the shot callers who earn the big bucks.  But it will not alter my opinion, they were not cool when they first appeared and I just think bad hair and overweight tourists with I love NY t-shirts on.  Or I think of those cool kids bringing it back with a little swagger, not that 38 year old in jeans and black T, thinking I look cool with a bum bag.  I wouldn’t even know what to put in it, the four things I carry go in my pockets.

And by the way, I bought the orange sneakers.