Bond, James Bond is the most iconic saying in cinema history and is linked to the phenomenon which is the Bond franchise, nothing has come before it and nothing will come after, that is if it ever stops.  Eon Productions have created Bond films since 1962 and have changed with the actors, story lines and times as they are.  Men everywhere see Bond as the ultimate in masculinity and class.  From fashion to fornication Bond had it all, the explosions the one liners. And over the last fifty eight years, apart from having some of the best cars, bad guys, women and gadgets we have ever seen, it has made its place in our culture.

With the 25th Eon film coming out later this year and as I started back in January to watch every Bond film from the beginning, this was a good enough time as any to let you in on my thoughts and feelings on this cinema behemoth.  And it started with a No. 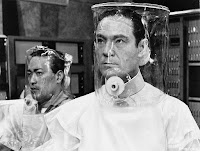 October 1962 the first film based on one of Ian Fleming's spy franchises was released on celluloid to a captivated audience.  The one million dollar budgeted film made nearly sixty times this in the box office and got into the hearts of the western world.  “Dr. No” is truly a bond film of its time and watching it now can, at times, be a struggle, if not a slightly whimsical one.  The title sequence which is now all glossy and part of the thrill was then just a 60’s style psychedelic sequence with bad 60’s music, ending with the 3 blind mice, the song and also the name of the assassins.

Dr. No has been said to be the best Bond film and that Connery was the best incarnation of the character and for a time I was in this camp.  But is it the best film, for the time, yes, but it is not that good of a film, with long drawn out scenes that stop you like the three minutes of checking for bugs with the bond theme in the background.  Or the Dragon myth explained with the tank style truck with an attached flamethrower, we could have done without it really.  I will agree that for the 60’s this was a great film, but it has aged, but it did start a journey through the decades we continue to enjoy. 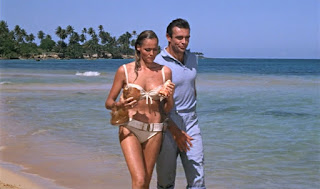 To note that Bond was to be played by Cary Grant but he would only commit to one film and even David Nevin was looked at, as he had portrayed him in the spoof Casino Royale.  That may have been a very different film with them, but Connery took hold even though he now famously hated the role, but it made him famous so should thank the films for making him a rich retired actor as he was not very good at acting.

Dr No was a film of its time and certain things would now not be possible, or right, like the makeup on Joseph Wiseman to make his portrayal of Doctor No look more Chinese to match the characters Chinese German descent. Very risky now, totally acceptable at the time and not the last time some racial makeup was used in a Bond film.

This film does have slight similarities with the book of Live & Let Die and over Bond you see bits taken from other books and complete changes, which come up a lot.  The Bond films were never linked to the books with details but a true medium of their own.

Like all Bond villains, Bond uses his license to kill, and dispatches them, the film has Julius No fall into a pool of Reactor Coolant after a fight with Bond, probably more cinematic than drowning in guano like the book.  So Bond saves the day and obviously gets the girl.
Newer Issues Older Issues Current Issue