It is time to light those cigars, take that vintage car straight through Havana to the front of Hemingway's favourite Cuban bar, El Floridita.  Then dance and talk your way through the night, and what shall you drink, well the cocktail created here of course, The Mojito.

Cuban white rum is a delight to drink, even with the mass produced rise of Bacardi as a brand.  The two favourites of one writer are Brugal Especial Extra Dry a fine Dominican rum which is great for mixing and Cana Brava to keep it in a Cuban style.  White rum is light and fresh and made for the summer months and for a great summer mix.  The Mojito is light and fresh and when done ice cold will refresh any poolside or barbecue laden gent and his friends.

It has been reported that this was Hemingway's favourite cocktail, one of many I would guess, and three bars report to have been the go to when he ventured to Cuba.  Writers like a drink, it helps get the brain cells active, or dulls them, so the words come spewing out. 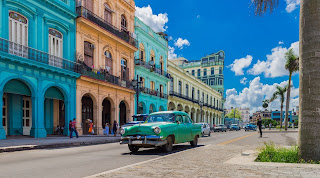 The mix of white rum, lime juice, sugar syrup, mint and soda water even sounds nice when broken down.  It lends itself to gatherings as made in the glass so you can do many at once.  Muddling the mint, sugar and lime juice in a highball, also known as Cuban glass, then topping with Ice,rum then topped with the soda.  Always serve with a straw.

The IBA measures are;

It is an easy one to adjust to your rum tastes, I for one do not like a Mojito too rum heavy so keep just below the regulated mix.  But no matter your tastes it always adds some South American energy to a summer party (when we are allowed again) to raise even the most introverted guest.
Newer Issues Older Issues Current Issue
Curated Articles of Note