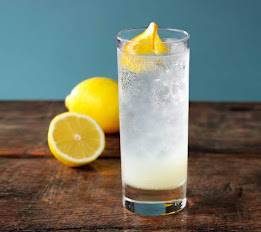 With the long awaited opening of bars across the UK and elsewhere in Europe and further afield and the most famous Dukes Bar in London now open as of August let's finish this cocktail series with a summer delight for the finale.
Mentioned before for my name's sake and a favourite of a dear lost friend of mine, this cocktail is full of summer sun, a blend of sweet and sharpness with a hint of botanical, the simple idea of the Tim Collins is that the flavours are not simple at all.  Spoken about by me as a Gin Fizz which it became to be known in the 1920’s and onward, the Tom Collins like we have found over this whole series a checkered and unknown past.
The idea of the Tom Collins was put on paper in 1876 by Jerry Thomas the so called ‘father of American Mixology’, or the guy that managed to write the first book on the subject and made it quite comprehensive.  But with someone saying it was created by a person called John Collins, which was then disparaged almost straight away as said person basically just miss quoted a song by Jim Collins.  The drink does resemble the gin punches enjoyed in London bars in the early part of the 19th century mostly the Garrick.  And like every cocktail known to man the Americans believe it came from them as it was served in the American bars across Europe and England in 1898. In my mind the name simply was made up as traditionally used is Old Tom Gin and is served in a Collins glass which is the long straight glass that comes up taller than a highball.
Whatever the sour history of this lemon delights name, the drink is just a treat all year round and especially when the summer sun is beaming down, who doesn’t want old fashioned lemonade to cool down.  Made with the most simple of ingredients, the IBA state it is;
4.5cl Old Tom Gin
3cl Lemon Juice
1.5cl Sugar Syrup
Shaken then poured over Ice
6cl Soda Water to Top Up
It can be made with many gins and I have found the smoother gins work better, you just need to be careful as they go down quickly so be careful, they don’t call it mother's ruin for nothing.
Newer Issues Older Issues Current Issue
Curated Articles of Note