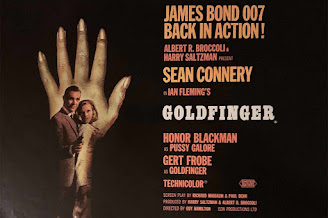 We have come to the third instalment of the spy franchise which is due to have it’s 25th film released this year.  Bond had finally hit the big time and the budget for this film was the total combination of the last two films, so the pockets were deeper.  Plus for me this is one of the most iconic Bond films in the franchise, with so many memorable moments, from painted ladies to whole lot of Pussy.

Before I get women's rights groups descending to destroy my perceived reputation I mean Pussy Galore, the very memorable leading lady played by Honor Blackman.  The way people talk about her as a bond girl is different to many, because she was strong, in control and not like many others even when she does succumb to Bonds charms.  But the way she is remembered was like she was in multiple films which of course she is not.  The character has come to be part of culture, partly because of the name. The producers nearly changed the name to Kitty but somehow managed to get around the censors.

But the bond girls didn’t stop there, even though the two other main women characters are short lived one stood out, mostly because she got painted in Gold.  Obviously not real gold even though it was meant to be in the plot.  Jill Masterson played by Shirley Eaton was painted top to bottom, leaving a large patch on her front as she would have died as did her character from Skin Suffocation, which Bond mentions as her cause of death.  Even though there is only a grain of truth in the death of this style, just google it.  And the final character to be remembered everywhere was Oddjob and his weapon of choice, the bowler hat.  Played so stoically by Harold Sakata, who said nothing throughout but still held a certain presence until the death of his character by electrocution which actually burnt Sakata during the filming but he held on until “cut!”.

This film was where my Bond journey began, not that I was around in 1964 but it was the first film I saw on television.  And maybe it is why it holds dear to this day but also I believe it is because I find it more Bond like that the previous films.  More hi jinx, just think of the eye watering laser scene, the gadgets also became part of Bond from here and something fans the world over love, in the most part, we will get the bad ones down the line, but here we have the kitted out Aston Martin DB5 the now iconic car owned by James Bond. Revolving number plates, the ejector seat, the oil slick, it was all conceived here for the film and then stuck in the Bond must haves. The car was used again in Thunderball (then parked up in my driveway, if only).

The plot and script were tongue in cheek and great, even down to the final part when the bomb is defused with seconds to spare stopping on 007, even though a bit much and will enlist a groan, you will still be smiling with it.  This over the top, quipping dialogue became the blueprint for bond films to come and we are glad for it.  The puns and sneaky style Bond plays golf with our man who loves gold, of course this is Auric Goldfinger, not the Austin Powers joke version. But like his comedy counter part he does love gold and plans on steeling a lot of it direct from the USA via Fort Knox. With killer gas and a squadron of women pilots trained and captained by Pussy Galore he has a full proof plan.  But obviously is foiled by James Bond and his knack for mostly getting in the way and then saving the day.  Even though like many James Bond films he is captured but then rather than killed in a slow cumbersome way so he can talk his way out of death, which he does by bluffing Goldfinger into thinking he knows all about the plan, rather than just the name.  Obviously it all works or would be a short film, but truthfully we all know if they killed Bond when they had the chance rather than gloating or chatting with him they’d get away with it.  Goldfinger is also the first time we see Bond get a bit more of beating, he does in the books quite a lot but here as always never enough to cut or bruise.

So looking back not the best bond, like many of these films they are dated but they did a great job for the time. Now where is my bowler hat?