Winter is coming, a well known phrase and a term now used by a writer whose brain has not come up with a witty term of his own, so easier to delve into the lazy world of pop culture, or in this case, outdated pop culture of a few years back. With this term in mind and even though this popular wardrobe staple will not keep away snow, fictional or otherwise it will however protect you against the brutality of the British weather.
Hailing, no pun intended, from the 1800's the Peacoat has been a naval and modern classic since the Dutch first designed a similar style for there navy.  Which the British then took and  adjusted the design for there own seamen and it became the standard uniform for the British naval petty officers, from there it went on to America and further, now being part of naval global attire.  The design was practical in every way which still holds true today.  It has large lapels which button up turning it into a eight buttoned, high wind breaking collared behemoth of a jacket. A design feature that will protect you from the high seas perfectly as well as waiting on the 06:50 train into the city.
The style has changed slightly for the modern classic we now satirically wear and is one of the most popular jacket styles ever created. It is slimmer than it's naval counterpart along with a more snug fit and silhouette, created by taking away the kick out at the bottom hem. As unlike our naval officers of the past we seldom find ourselves climbing up ropes. 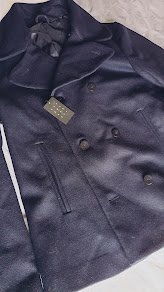 I have been thinking of this style of jacket for some time but have seen some ill fitting disasters on the streets and even on the models hired to sell them for online shops.  My final decision was made by none other than Daniel Craig in Skyfall, his was dark and really nicely fitted to his body, I surely would look like this if I could get the cut and fit correct.  Like much of my wardrobe of late I go for a slightly higher price or quality of make to get more life out of a garment rather than the fast fashion counterparts.  I did look at Next as sometimes it can be worth a look even though the quality is not always there, the only style they had was high priced due to a label and had a mocked inner lining therefore not a true Peacoat.  I am not sure where this mock inner comes from but it looks terrible and ruins the shape and reasoning behind the coat's design and function.  I settled for an Arlen Peacoat in a dark navy purchased from the team at Thread, the online store and stylist site.  This item is exclusive with the store and I do like that thinking when it comes to shopping, I know, but it works for me.
When I first saw the coat though it was exactly as I mentioned earlier, the model was too slim for the coat he was given for the photo and looked boxy and ill fitting.  This did put me off but after some thought, and the option of a free return, I ordered it anyway and I am glad I did.  It has a perfect snug fit and keeps to my general shape.  It looks great with a shirt and room enough for an extra layer if required.  Even though you will not find me joining the Navy or even travelling on a boat anytime soon, you will however see me in this double breasted coat for many winters to come.
Newer Issues Older Issues Current Issue