“No, if anyone orders Merlot, I'm leaving. I am NOT drinking any fucking Merlot!” Miles Raymond.
If you are not acquainted with Miles you need to watch 2004’s delightful film Sideways.  Miles is played by the character actor Paul Giamatti.  But this is not about a film, it is about a wine, well a Grape, one that I do not like.  But I feel it is time to look away from my past and head in full stem ahead (mis-spelling intentional).
I should explain first of the reasons behind my dislike as Merlot is the most versatile grape in the world.  One of the child varieties of the Cabernet Franc, it will grow in many different climates and soils and this is why it is found in Bordeaux and also Australia among the many regions it is found. Its popularity is also one to be admired, with its taste range, from it’s medium to full bodied realm that it lies, the soft but present tannins, the subtle sweetness.  And this is only if you are drinking a bottle of merlot.  What about the amount of wines that use it as part of their blend. How can I not like such a clear grape winner in the world of wines. 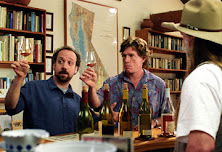 A notion that this is wine snobbery is, I am sure, part of the dislike, as I grew to drink wine and my palette journey began, Merlot was the supermarket behemoth. It was less than five pounds in the stores on offer and it was easy to drink and drink it we did. A lot.  It was the staple in pubs and restaurants across the country, it was the dreaded House Wine in so many places I frequented at the time.  My meagre salary then was just about stretching to the nicer bottle of the house. Once I moved into the world of wine more and more, the notion of drinking this over consumed mass produced dirge was one of Miles Raymond standards of disgust.
We learn as we go and in 2004 when Sideways had an impact, mostly in America of Merlot sales hitting rock bottom and Pinot Noir heading to the top this became the wine to have, not Merlot, why downgrade ourselves, we want Pinot Noir, the other less flavoursome but delicate grape of choice.  Merlot was put back on the dusty shelf where it has sat, for me, for many years.
There are other reasons behind my dislike of the Grape, the smell, it is sadly one that resonates with over indulgence of bar customers, a bad memory perhaps, the amount that was spilt on me by various people, the stains of the clothes and the mind churning into the psyche of disgust.  The feelings and the thoughts the grape brings up fuelled the ongoing dislike for this quite humble grape.
I believe that the time has come to push back the wine snobbery plonker idea of Merlot and stand up to the smells associated with the basic Merlot bottle and after some general research it seems I have already started to reintroduce this dark grape into my life without even realising.  As the Merlot grape is used heavily as a blending grape and small amounts of it are used.  This hit home like the Red Sox World Series win of 1903 as I shared a bottle of 12 Volts 2018 which is a blended red wine from Mallorca, which holds 10% of Merlot in the mix, it was there in the background, dancing a jig and happy it had duped me, and I am glad it did.  So I looked back at some other recent tastings, like the Solliard Bordeaux 2017, which has a small amount of merlot which gives it that plum within the red fruits of the Cabernet Franc or the Corvo Rosso 2017, which is mostly Merlot, it was like molten Jam and I now know why.
In conclusion my diversion of Merlot was in vain or should I say Vine in this instance, and my taste is surely just more peaked than I thought and the decision is I am just unable to drink shit Merlot.
Newer Issues Older Issues Current Issue