Issue 18; Holiday Skirmish, Which Traveller are You?

The shuffling of feet, the dragging sound vibrating through your mind, the drone noise of the moaning.  You may think I am talking of a zombie apocalypse, close, I am talking travel. 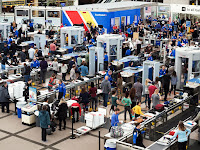 After a recent romantic trip to Paris I came to think that people as we are now, are not actually built mentally to travel at all.  We love the destination but 99% of travellers (after some people watching and my annoyance of other things) should not be allowed to board a plane go through customs or use a bag scanner.

There are three types of traveller all with there own way to irritate the rest of us, who come under the better traveller; 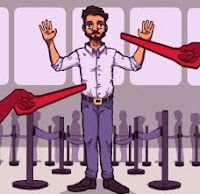 The newbie actually goes on holiday every year, through an airport or international train station but yet still are not aware it seems of what to do. They struggle through passport machines normally queuing rather then going to the green lit one.  They fill their pockets of everything then struggle to get through security. They stop just they get in any terminal and crowd around like gazelle to feel safe. Then will go to a gate within seconds of it appearing and run like a lion is chasing them. They are closely followed by the number 3 in this list. 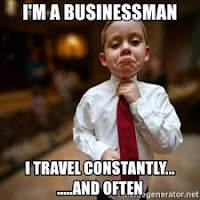 These are normally business men they give off an air of importance and are generally rude to everyone.  They act like even though we are in the same boat, as they are veterans they somehow get to be assholes.  They are normally running late and seem in such a rush to get everyone and huff and barge their way through any terminal.  And make comments to other passengers who are double backing, even when pointed out they are also about to go the wrong way (true story).


These people are slightly related to the ‘Apparent Newbie’ they seem unaware of what they are doing but have no courtesy for anyone else.  They are easy to spot as you are normally stuck behind them after being scanned at security as they empty their five trays of items without removing the tray from the conveyor then walk off. Leaving you are the staff the job of clearing the area so you can finally get your carry on and watch back.  Sadly you will pump into them again as they randomly walk around and ask pointless questions to members of staff about their travel arrangements. Finally when they see movement of the Apparent Newbie they will follow, even if it results in them being in the totally wrong place.


If you see me I will be the one having breakfast when the standing begins and strolling to the gate after the rush, and last one the plane once everyone has rushed to sit down for 30 minutes in their designated seats.
Newer Issues Older Issues Current Issue