Issue 39; The Duke On A Sunday 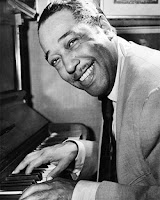 It is Sunday, lunch is cooking away in the kitchen, the fiancé is on roasting duties and I have just got back from a quick wine buying pilgrimage to slightly restock the cellar (also known as the rack in the kitchen which weirdly holds a perfect temperature at all times).  With this being what I can only describe as a perfect Sunday it only feels fitting to lay some vinyl on the turntable and there is no better than Duke Ellington on a Sunday afternoon.
The album of choice is Happy Reunion which was recorded in 1956 and 1958 but not released until 1985 by the Doctor Jazz label.  It is a favourite of mine as takes you back to 50’s Chicago and has two small sessions he recorded in the city.  It certainly is a classic even though held for so long, clearly at the time it was thought not to be worthy of the release.  "Allmusic" reviewed and gave two and a half stars out of five, highlighting hearing Paul Gonslaves on tenor sax play 31 choruses on “Diminuendo an Crescendo in Blue”, which truly is a treat for jazz fans.
This album and the delightful growing smell of a classic English roasted ham in the air just feels me with smooth relaxed feelings.  And this is what you want on a Sunday before the working week kicks back in to spoil the mood.  I saviour the rolling sounds as I sit keeping this time as still as possible as not to let it go.
The only thing that could in part help and add a little extra relaxation to the soul would be a glass of wine and for a Sunday early afternoon that choice of wine is open for debate, but I think I will go French and raise a glass to the Duke for making my Sundays that little bit more perfect.
Newer Issues Older Issues Current Issue